Suburbs where houses grow in value at least $100 a day

IMAGINE earning more than $800 a day for doing absolutely nothing.

Data from Corelogic reveals house owners in City Beach earned the most money per day in median value growth for their properties over the past year.
The oceanside suburb’s median sale price has risen 18.1 per cent to $1.94 million in the 12 months to February as the WA property market continues to rebound.
That means lucky City Beach homeowners recorded a daily growth of $815 in the value of their properties simply by living in them — the most of any suburb in Perth.

Cottesloe and North Fremantle followed close behind, having grown $670 and $512 a day respectively.
They were among 20 suburbs across the city — dominated by western and inner-city locations —that earned homeowners at least $100 a day over the past year. 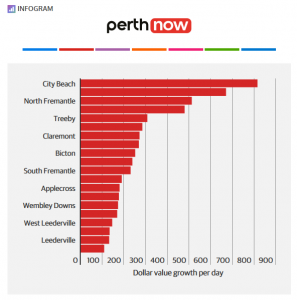 But not everyone was a winner. Almost 200 Perth suburbs’ median house value declined in the same period.
House owners in the southern fringe suburb of Oakford were the worst off, losing $611 a day, followed by leafy Peppermint Grove (down $496 a day).
David and Julie McLean saw the value of their Yokine home rise $133 a day before they sold the four-bedroom, three-bathroom property for $773,000 in February.
“After I bought it (six years ago) and renovated it, I am walking away about $10,000 up,” Mr McLean said.
The McLeans initially listed the house in November last year asking for more than $850,000, but took it off the market in mid-December because there were no offers. It sold two weeks after being re-listed in the middle of January.

Sales agent Julie Pedulla, of Harcourts Integrity, said Yokine’s proximity to the CBD, as well as the golf course and Yokine Reserve contributed to the price lift. The median house value has grown 8.1 per cent in the past year to almost $637,000.

Justin Davies, of Space Realty, said buyer demand was about four times stronger than last year, which had pushed up values in the western suburbs.
“Properties are not having just one offer but three to five offers, which hasn’t happened for the past five to seven years,” Mr Davies said. “In general terms, people see good value and feel the price could be more by spring, and grow again by this time next year.

Perth metropolitan area’s median house value fell 3 per cent in the past year to $508,086.

CoreLogic senior research analyst Cameron Kusher said while values had fallen, there were signs the market was improving.
“Transaction volumes have begun to increase … the volume of stock advertised for sale has reduced (and) properties are selling a little quicker than they were a year ago,” he said.
“This suggests housing conditions are slightly improving and later this year we wouldn’t be surprised if values have stopped falling.”