Looking for love: The best places to swipe right in Perth 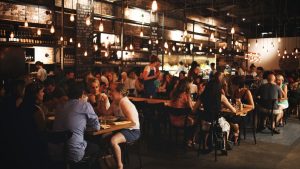 With nearly one in four West Australians living alone, suburbs that offer lifestyle, amenities and accessibility are a lure to these singles. Living in or near a city means shops, bars, restaurants, and cultural and leisure activities are all within reach and the type of housing stock usually suits those who live alone.

Single people tend to gravitate towards the urban centres, which can cater more easily to their social lives than the ‘burbs. 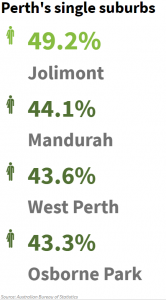 According to last year’s census data, East Rockingham was the Perth suburb with the highest proportion of single households. About two-thirds of people live alone in that coastal suburb.

Singles are also drawn to bustling beachside locations such as Scarborough or the vibrancy of Fremantle and its surrounds. Other suburbs close to the CBD that have a high proportion of solo dwellers include Northbridge, Leederville, Highgate, Joondanna, Glendalough, Subiaco, Maylands and Rivervale.

The median price of a two-bedroom unit in Mandurah sits around $235,000, or $320,000 for a three-bedroom house. Photo: Harcourts Mandurah

East Rockingham is not a suburb you would traditionally associate with a thriving singles scene (it does have a median age of 64). Just under half of its population are divorced, separated or widowed and another 17 per cent have never married.

But if it’s a younger vibe you’re after, along the southern coastal corridor, 74 kilometres south of Perth, lies Mandurah. Here, just over half of the population rent and only 35 per cent are married. The median price of a two-bedroom unit sits about $235,000, or $320,000 for a three-bedroom house.

Acton Mandurah sales manager Michael O’Brien has seen a shift to a younger demographic, drawn by the ability to commute by car or train to Perth for work or study.

“Central Mandurah is a cheap place to buy or rent,” he said. “Young people can enjoy a good quality of life here. We’ve got clean sandy beaches, we’ve got estuary, canal, beach or riverfronts, an easy commute to the city, a redeveloped Forum shopping centre and an entertainment precinct, including the Mandurah Performing Arts Centre, which attracts some big acts.” 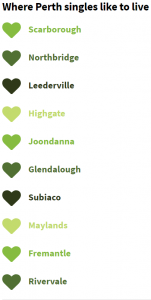 Mr O’Brien said the housing stock within a five kilometre radius of central Mandurah was diverse – from inner-city apartments to acreage. “It’s all about affordability, quality of life and proximity to the city,” he said.

Of the suburbs in the top five, West Perth best encapsulates an inner-city area that draws a young professional crowd – nearly half its population is aged between 20-34 years, two-thirds are not married and about 80 per cent live in apartments.

Agent Richard Self, of Mack Hall Real Estate, said a different West Perth buyer had emerged in recent years, as its revitalisation as a residential area continued. “It’s gone away from the investor to a lot more first-home buyers,” he said. “There are a lot more young people because the property prices have come down. It’s affordable for the lifestyle that it offers.

“People are drawn to West Perth for its proximity to the CBD but it’s like a green oasis away from the city, it’s close to Kings Park, and offers plenty of apartment accommodation.

The city centre itself has also seen a sharp increase in residential growth, with single people drawn there to enjoy the cosmopolitan high life. According to the census, about 60 per cent of the CBD’s population are aged 20-39 years, the majority have never married and almost half walk to work.

The boom in apartment developments offers solo buyers and renters a more affordable way to score that inner-city lifestyle and enjoy the security and community spirit of living in a complex where resort-like amenities such as a gym, pool and alfresco dining area are often included.

Blackburne managing director Paul Blackburne said younger people were flocking to inner-city apartments. “They are attracted by the short commute times to work, which provides them up to an extra two hours of leisure time that they would otherwise be wasting per day commuting from work to the outer suburbs,” he said.

“They are forgoing the extra bedroom they get in the outer suburbs in exchange for a more active, convenient and social life that is available through apartment living. Close proximity to entertainment precincts is attractive as they will generally want to socialise with others.”

Single people tend to gravitate towards the urban centres, which can cater more easily to their social lives than the ‘burbs.