One bedroom v two bedroom apartments – which is better for the first home buyers? 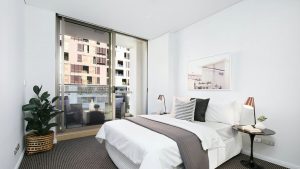 It’s a tricky proposition for the first time home buyers – faced with a steep entry point, is it worth stretching the budget even further to get a second bedroom?
According to Domain Group data, two-bedroom apartments cost an average of 13 per cent more across Sydney, although this can vary depending on the suburb.

In Sydney’s south and south-west, an extra bedroom will cost you 14 per cent more, while in the inner west and northern beaches, you can expect to pay an extra 30 per cent. In the city and east, a second bedroom will increase the price by a whopping 49 per cent.

A second bedroom is not just about having space, either, as the extra room can help earn its keep through rent, or by making an apartment easier to sell when the time comes to upgrade.
Two rooms are better than one
Taj Singh, from First Home Buyers Australia, says there are several advantages to holding out for another bedroom.
Two-bedders offered greater resale value in the future, especially as lenders were less willing to lend on smaller apartments – particularly those under 50 square metres.

For couples looking to extend their family, a two-bedroom apartment may allow them to live in the apartment longer, especially when they only have one child, reducing the need to upsize more urgently than if you just settled on a one-bedder initially,” Singh says.
“If you are currently not using the second bedroom, some first home buyers may consider getting a family member to board or consider a flatmate to assist with the mortgage repayments.”

“Especially with the rise of Airbnb, it’s important from a rental perspective to think about that second bedroom,” he says “That second bedroom will get a much better yield.” It can also serve as a home office.
“People are not trading homes as much as they used to – it’s a lot harder to get into the market, and you buy into an area for a reason whether it be transport or schools,” Bainey says, pointing out that the extra flexibility could allow buyers to stay in their desired area longer.
And with newer apartments in particular, a two-bedroom unit is more likely to come with a second bathroom.

Buyers Agent John Carew, from Mayfield Property, says deciding on a second bedroom is a “pretty common conundrum”, but he agrees that more rooms can give buyers more time.
“If you buy something and then you outgrow it in 18 months, you’re going to have the same problem,” he says.
“If you can stretch a little more, or have something unrenovated rather than renovated, or head a little further out, then you could last a little longer in the property. The more space you’ve got, the better.”
Carew encourages his clients to think about a five-year horizon, and what, realistically, their long-term accommodation needs are.
Or are they?
Buyer’s agent Michelle May, who works in the inner west and inner east, says in terms of stretching their budget to a two-bedder, first home buyers might be better concentrating on buying a better quality apartment, rather than a bigger one.
“Focus on a car park or a balcony, or a higher level of finish, rather than squeezing in a second bedroom,” she says. “You want them to be of equal size – you don’t want tiny bedrooms, they don’t perform as well.
“I recommend that people focus on quality over quantity. It depends on the quality of the build. When it sells, you will get more money – better than median capital growth.”
She also says while it’s good to have a shiny new apartment, the older red-brick blocks could provide a safer option. “They’re not very sexy, but you know what you’re getting.”
Bainey agrees that, ideally, buyers should seek out an apartment with bedrooms of equal size. “It depends on the layout but new apartments are built around minimum apartments standards” – referring to bedroom sizes.
“I’ve been looking at this trend over the last few years – buyers are much more discerning today then they used to be. Myself, I’m looking at providing much bigger bedrooms.”
Bainey says he has seen more demand for internal space over external spaces like balconies, but it really comes down to the budget.
“Financing – for one and two bedrooms is much the same, as long as it meets the minimum standards,” he says. “But if you’re trading off space versus amenity – if you’re closer to the city there’s going to be a lot more demand for one-bedroom apartments.”
This is especially true for first home buyers, who are very budget sensitive. “You’ve got to bite the bullet and sacrifice something.”